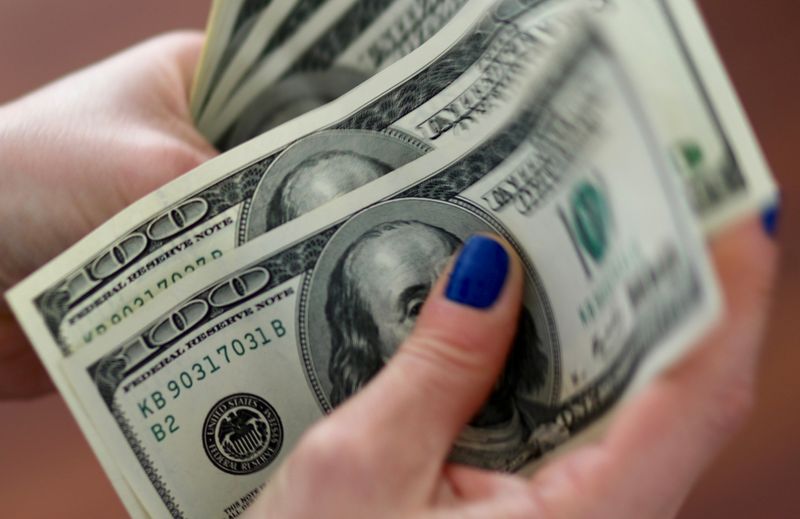 Against the euro, Aussie, pound, Swiss franc and yuan it is poised to re-test multi month or multi year troughs made earlier in the month, though moves in morning trade were small as Wednesday’s release of the Federal Reserve minutes looms on the horizon.

Investors have been relieved by a delay in the review of the U.S.-China trade deal this week, which has left the agreement standing and reinforced a belief that the trade relationship can hold even amidst conflict on multiple other fronts.

A fresh rally in tech stocks added to the positive mood, and together with a pullback in U.S. yields and a weak reading in a U.S. manufacturing survey has many traders sticking to their bearish convictions on the dollar.

Net bearish bets on the U.S. dollar grew to their largest since May 2011 last week and spot trade in recent days suggest the position has only grown further since.

“Extended short dollar positions risk a sharp pull back if the dollar downside stalls further, but for now the negatives for the dollar are mostly still in place,” said analysts at Singapore’s OCBC Bank.

“We are reduced to staying in the game while the music is playing.”

OCBC called out soft data, the political impasse holding up U.S. fiscal stimulus and a “limited appetite for interpreting Sino-U.S. relations as being in an outright downward spiral,” as backing the dollar’s gloomy outlook.

Underscoring that view, the yuan sat at 6.9306 per dollar, within range of a five-month high of 6.9280, despite the Trump administration flagging a further tightening of restrictions against Chinese tech gear maker Huawei.

On the data front the New York Fed’s Empire State business conditions index tumbled to 3.7 in August from 17.2 in July – far lower than the 15 points forecast by a Reuters survey.

“An impaired banking system could hold back the U.S. economic recovery like it did in the aftermath of the (2008 crisis),” he said.

Investors expect the release of U.S. Federal Reserve minutes on Wednesday to possibly determine the next moves.

The British pound was stalled around $1.1311 as investors are watching the latest round of Brexit negotiations, with the future of London’s financial institutions’ access to the European market in focus.

Against a basket of currencies (=USD) the dollar sat at an eight-session low of 92.762.

Among G10 currencies, the kiwi was the laggard as New Zealand’s largest city remains under lockdown and anticipation of future monetary easing weighs on the currency.

It last bought $0.6557 and traders said bets on the kiwi dropping had supported the Aussie as investors sought exposure to the Aussie/kiwi cross, which is trading at a two-year peak.

“The move has been one way traffic,” said Chris Weston, head of research at Melbourne broker Pepperstone, who is holding for the ride even though the pair (AUDNZD=) has hit his price target of NZ$1.10 per Aussie.

StockBeat: Vamos a la Playa (Lockdown is Over)

Why Is Beyond Meat’s Stock Soaring (Again)?