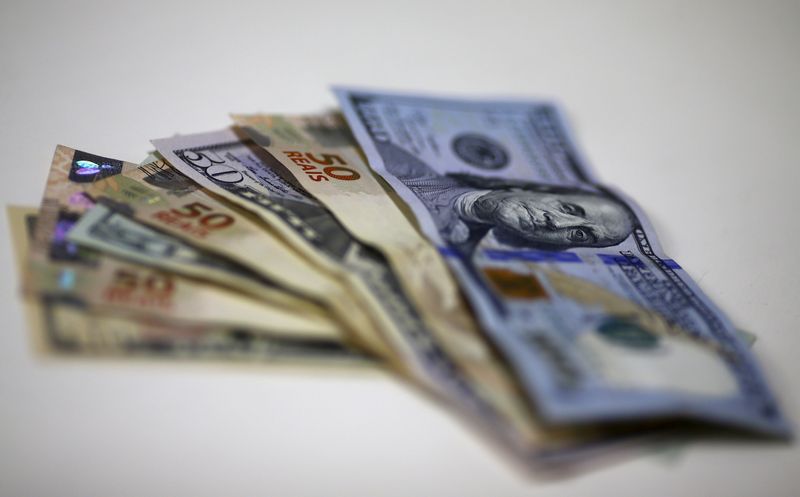 BUENOS AIRES (Reuters) – Brazil’s real will likely extend its recent uptrend after a crash earlier this year, supported by higher U.S. dollar inflows but held back by a brutal recession that has curbed imports and bloated the budget deficit, a Reuters poll showed.

The real (BRBY) logged a 4.6% gain in July, its best month since December. This could anticipate a stronger performance in the near future despite several existing risks, particularly the continuing COVID-19 health crisis.

The real is seen appreciating to 5.20 per U.S. dollar in one month from 5.25 on Wednesday and then recovering further to 4.85 in one year, rising 8.2% over its value this week, according to the median estimate of 29 economists polled July 31-Aug. 5.

“Volatility has subsided but should pick up in Q4 … because of underlying U.S.-China tensions, U.S. elections and a second COVID-19 wave,” noted analysts at Rabobank, who have raised their forecasts for the real and expect it to trade near 5.25 per dollar by year-end from 5.45 previously.

“Domestically, the drivers still are the uncertainty created by COVID-19, and the resulting fiscal costs.”

Since the start of 2020, the real is down 23.4%. Ending December around 5.0 per dollar, as implied in the survey, would mean an annual loss of almost 20%, its weakest year since 2015, when the currency was hit by a local political crisis.

Brazil posted a record $8.1 billion trade surplus in July as the economic crisis triggered by the coronavirus outbreak led to a steep decline in imports. The Economy Ministry has raised its 2020 surplus forecast by almost 20%.

On the negative side, the pandemic is set to keep weighing on the currency. President Jair Bolsonaro has minimized the gravity of an illness that could exceed the grim mark of 100,000 deaths.

Another threat comes from a bloated budget related to the ongoing fight against COVID-19. “Fiscal risks are high and on the rise, local markets have been complacent but this can’t last forever,” analysts at ARX Investimentos in Rio de Janeiro wrote.

Last month was good too for Mexico’s peso which, like the real and other emerging market currencies, has benefited from a drop across the board in the greenback.

The Mexican currency still has some room for improvement on the back of this. “We expect the MXN to continue consolidating between 22.00 and 23.00 per dollar in coming weeks,” said Santiago Leal, senior FX strategist at Grupo Financiero Banorte.

With almost 49,000 deaths from the pandemic, Mexico is the second most affected country in Latin America, which has surpassed Europe to become the region with the highest coronavirus death toll worldwide.

However, investors recognize Mexico’s solid trade links with the United States and President Andres Manuel Lopez Obrador’s austerity efforts, which stand out even more when compared to staggering deficits in peers like Argentina.

“The risk of additional pressure on the peso has not completely vanished but is minor given the decent shape of external balances and a relatively conservative fiscal stance”, Societe Generale (OTC:SCGLY) analysts wrote in a report last Friday.

Elsewhere, Argentina’s peso staged an extremely unusual rally versus the dollar in the black market on Tuesday after the country reached an agreement with creditors to restructure around $65 billion in sovereign debt.

Some analysts hope the deal will bring more certainty and the parallel rate, used in many transactions, will start to converge with the heavily regulated official one, reducing a spread that is just one of several anomalies in the country.

(For other stories from the August Reuters foreign exchange poll:)

(Reporting and polling by Gabriel Burin in Buenos Aires; Additional polling by Khushboo Mittal and Sarmista Sen in Bangalore; Editing by Ross Finley and Jonathan Oatis)

Tesco to hand back £585m of pandemic business rates relief

5 things to know before investing in bitcoin

Why Is VeriSign (VRSN) Up 0.6% Since Last Earnings Report?