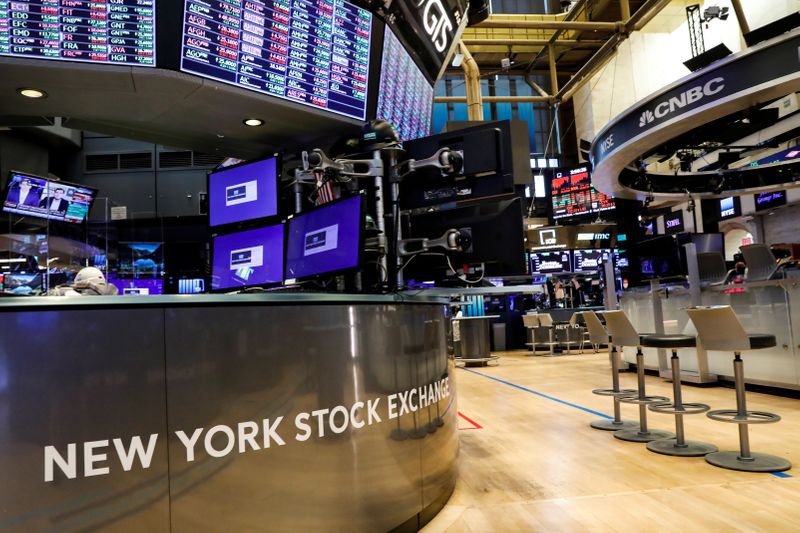 (C) Reuters. A nearly empty trading floor is seen as preparations are made for the return to trading at the NYSE in New York

The major stock indexes oscillated for much of the day but ended in the black. The Nasdaq had the smallest gain, capped by a 1.2% drop in Amazon.com Inc (O:AMZN) shares.

“Investors are starving for income and they can’t get that in the bond market so they’re looking to equities,” said Peter Cardillo, chief market economist at Spartan Capital Securities in New York. “But even though the averages are going up, investors seem to be growing more cautious.”

The latest figures showed more than 1,000 deaths in the United States from COVID-19 on Tuesday, bringing the total death toll to nearly 142,000. Experts warned that number will rise further due to a surge in new infections.

Congressional Democrats and Republicans remained divided on the details of a new stimulus package expected to cost $1 trillion or more, less than two weeks before extended benefits are due to expire for millions of unemployed Americans.

“I suspect the administration is going to push to pass stimulus before the extension expires,” Cardillo added. “Or consumer spending is going to falter again.”

On the economic front, sales of existing homes jumped by a record 20.7% in June, according to the National Association of Realtors.

The Philadelphia SE Housing index (HGX) was up 3.0%, handily outperforming the broader market.

Ten of the 11 major sectors in the S&P 500 advanced, with energy (SPNY) and financials (SPSY) losing ground.

Utilities (SPLRCU) enjoyed the biggest percentage gain.Second quarter earnings season is in full-swing, with 75 constituents of the S&P 500 having posted results. Of those, 77.3% have beaten consensus, according to Refinitiv data.

Shares of United Airlines Holdings Inc (O:UAL) dropped 4.2% after the company reported an adjusted net loss of $2.6 billion in the April to June quarter.

Microsoft Corp (O:MSFT) shares were down more than 2% after the bell, following the company’s quarterly report.

Advancing issues outnumbered declining ones on the NYSE by a 1.57-to-1 ratio; on Nasdaq, a 1.17-to-1 ratio favored decliners.

Volume on U.S. exchanges was 10.32 billion shares, compared with the 11.28 billion average over the last 20 trading days.

Gold Gains as Fed Vows to Use All Tools, Extends Swap Lines

Crude Oil Drifts Into the Weekend; Libya Lashes out at Russia