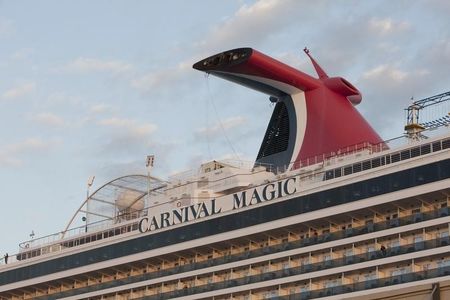 By Christiana Sciaudone and Liz Moyer

Investing.com — Admittedly, this isn’t the best time to talk about taking a cruise. A still-pervasive pandemic has put a damper on things for now, but there is hope.

Carnival Corporation (NYSE:CCL), Royal Caribbean (NYSE:RCL) and Norwegian Cruise Line Holdings Ltd (NYSE:NCLH) halted operations around March. But during that time they haven’t been standing still, and just a few months later they’re getting ready to set out to sea again.

A CDC order keeping them in port until the end of September isn’t stopping some operators from planning trips outside the United States. But cruise lines will likely struggle until tourists return to the seas, forced to take on debt to keep operations going.

Investing.com’s Christiana Sciaudone and Liz Moyer argue the bull and bear case on cruise lines. This is Point/Counterpoint.

Carnival (NYSE:CUK) has three ships scheduled to head out next month from Germany, and departures from Italy could be close behind. Norwegian’s still going to Alaska in September, and may restart other trips after October. Like Carnival, Royal Caribbean is set to start traveling again out of Germany with their TUI cruise line, as of July 24.

The cruise lines don’t need to be running full steam to make the numbers work, either.

In 2019, Carnival said operating just 15 ships resulted in cash flow break-even. This year, if they operate 25 ships, generating 40% of cash flow, it would cover the pause costs for the rest of the fleet and all shoreside SG&A, and lead the company to be cash flow break-even, Chief Financial Officer David Bernstein said on an earnings call earlier this month.

They also have the chance to operate only their most productive and newer ships, which should optimize earning power, said Jaime Katz, senior equity analyst at Morningstar.

But who, you may ask, would ever want to go on a cruise at a time like this? We can’t exactly name them, but they’re out there. The cruise lines have the numbers to prove it.

Carnival reported July 10 that it has seen steady demand for new bookings next year; for the first three weeks in June, almost 60% of 2021 reservations were new.

Norwegian said in May that there continues to be demand for cruise vacations, particularly beginning in the fourth quarter 2020 and accelerating through 2021. The company’s overall booked position and pricing for 2021 is within historical ranges, it said.

The companies have also been tapping credit markets to bolster their balance sheets. As of May 31, Carnival had $7.6 billion of available liquidity, and $8.8 billion of committed export credit facilities available to fund ship deliveries originally planned through 2023.

Norwegian added $2.4 billion.That along with other “liquidity-enhancing initiatives,” will help it weather 18 unlikely months of suspended voyages, according to CEO Frank Del Rio.

Finally, at Royal Caribbean, we find recent bond sales that helped add to the $6.6 billion in cash on their balance sheet, Bloomberg reported.

And while the U.S. Congress ignored the industry when handing out cash, the U.K. handed Carnival GBP25 million ($31.3 million) and Royal Caribbean GBP300 million ($375 million), Skift reported. Something’s better than nothing.

Looking at the shares, Norwegian, in particular, is cheap, said Morningstar’s Katz, with book value per share higher than where it’s trading now.

“It’s still trading at a discount, but what that discount implies is that cruising resumes at some point,” Katz said in a phone interview on July 17. “There is a finite period to this so it should again be a revenue generating business.”

Plus, because of where they are incorporated, they don’t pay taxes, she noted.

That’s basically the case against cruise ship operators at this point.

While many industries have rebounded since hitting their pandemic-era lows in March and April, cruise operators have struggled. Royal Caribbean, Carnival, and Norwegian Cruise Line are all down more than 60% this year and ships remain empty as Covid-19 cases spike across the country.

Analysts expect Royal Caribbean to report a loss of $4.55 a share next week, according to Briefing.com. Carnival Cruise Line, which next reports is seen having a loss of $1.97 when it next reports in September, though it recently said it sees an increase in bookings for next year.

Coronavirus is especially a problem indoors in tight quarters, as public health officials have been telling the world for months. This was obvious with cruise ships during the spring. Many continued to operate, with their live entertainment venues, night clubs, and buffet dining in full swing, and experienced big outbreaks of the virus among passengers and crew.

One of the most notorious examples was Carnival Corp.’s Diamond Princess, which docked in Japan with an outbreak of more than 700 infected people, about 20% of the more than 3,700 people on board. Nine of those people died.

People kept getting on cruise ships during the spring, when coronavirus was raging worldwide, despite the warnings. On Thursday, the CDC blamed cruise operators for widespread transmission of Covid-19, counting 99 outbreaks among 123 ships in U.S. waters from the beginning of March to this month. That includes almost 3,000 cases and 34 deaths on board ships in U.S. waters.

The CDC extended its March no sail order through Sept.30. Already many cruise ship lines had voluntarily suspended operations to mid-September. They have to come up with plans to prevent the on-board spread of Covid. The CDC has complained about cruise operators having inadequate plans for monitoring crew, inadequate medical and personal protection supplies, and insufficient rules for social distancing and other onboard restrictions.

With no passengers, cruise operators are burning through cash and being forced to raise money to stay in business. Norwegian Cruise Line said Thursday it was trying to raise $1.2 billion to get through the crisis, including $925 million in debt. Carnival recently sold $1.3 billion in debt, Motley Fool noted, at an expensive interest rate of 10%.

Even if Covid-19 goes away and passengers return to cruise lines, paying back that expensive debt with much-depleted cash stores is going to make it tough for the big operators to return to profit quickly.

Pandemic Changes Business Presentations – But There Is Help!

Biden to attack Trump on healthcare in election battleground state

San Francisco could become the first major US city to grant voting rights to teens...

Why Is Bank OZK (OZK) Down 8.8% Since Last Earnings Report?