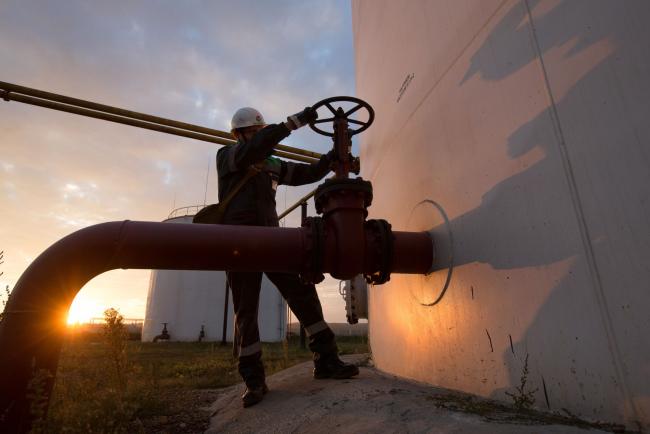 (C) Bloomberg. An employee turns a control valve on pipework beside a storage tank at an oil delivery point operated by Bashneft PAO in Sergeevka village, near Ufa, Russia, on Monday, Sept. 26, 2016. Bashneft distributes petroleum products and petrochemicals around the world and in Russia via filling stations. Photographer: Andrey Rudakov/Bloomberg

(Bloomberg) — Oil fell further in Asia before an OPEC+ meeting on Wednesday that may confirm the producer bloc’s intention to taper output cuts, and as U.S.-China tensions increase once again.

Futures in New York dropped 1.2%, after falling 1.1% on Monday. Expectations are that the cartel will begin unwinding historic supply curbs as planned in August, and Russia’s top producers are also preparing to increase output next month. The additional supply will hit the market while the U.S. continues to struggle to control fresh outbreaks of the virus.

An increase in tensions with China also hit market sentiment late in the U.S. session, after the Trump administration rejected China’s expansive claims in the South China Sea. That marked a reversal of its previous policy of not taking sides in territorial disputes in the region and escalating tensions with Beijing on yet another front.

Oil’s rally over the last few months has stalled as traders weigh a resurgence of the virus in sunbelt states and elsewhere in the U.S. that’s casting a cloud over a recovery in gasoline demand. At the same time, U.S. stockpiles remain stubbornly high.

The panel that reviews the OPEC+ deal will consider whether the alliance should keep 9.6 million barrels of daily output off the market for another month, or taper the cutback to 7.7 million barrels as originally planned. Members are leaning toward tapering, according to several national delegates who asked not to be identified.

How Much Higher Could Nasdaq Rally?

Money Supply And Why It Could Threaten The Market

Chart Of The Day: Amazon Headed Lower But A Bullish Entry Could Be At Hand