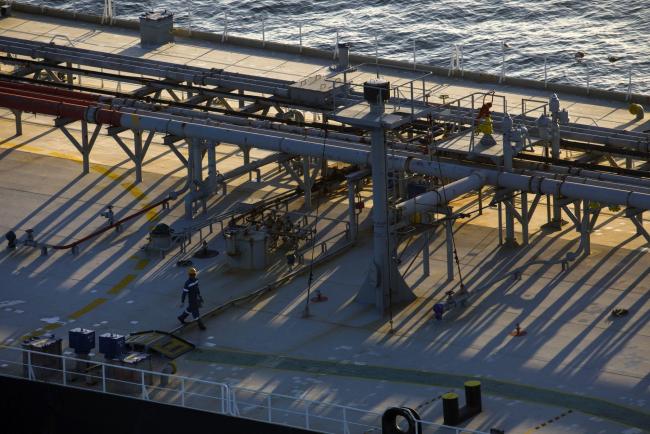 (C) Bloomberg. A crew member walks on the deck of an oil tanker anchored in the Pacific Ocean in this aerial photograph taken above Long Beach, California, U.S., on Friday, May 1, 2020. The volume of oil on vessels located just offshore the state peaked at 26 million barrels over the weekend, about a quarter of the world’s daily consumption, before dropping to 22 million barrels on Monday, according to Paris-based Kpler SAS, which tracks tanker traffic. Photographer: Patrick T. Fallon/Bloomberg

(Bloomberg) — The Trump administration’s plan to add as many as 50 oil tankers to an already long list of sanctioned vessels would be enough to send global shipping costs surging under normal circumstances.

But the demand fallout from the pandemic may have freed up enough vessels to keep prices from skyrocketing as they did last year when the U.S. announced penalties against units of China’s biggest shipping company for violating restrictions on carrying Iranian petroleum.

“Adding 50 more ships to the list may not be enough to bring another spike,” said Peter Sand, chief shipping analyst at industry group BIMCO, citing a mismatch in supply and demand caused by the hit to global oil demand from the coronavirus.

The Treasury Department is preparing to ramp up maritime sanctions to choke off trade between Iran and Venezuela, a person familiar with the matter said this month. Bad actors are constantly seeking new ways to exploit global supply chains and Treasury will continue to target those engaged in sanctions evasion and illicit activities related to shipping, said a spokesperson.

About 130 oil and fuel tankers are currently under U.S. sanctions, according to the website of the Treasury’s Office of Foreign Assets Control, or OFAC, up from about 80 a year ago. They include vessels that can handle crude, refined products and ship fuel, and Very Large Crude Carriers (VLCCs), which are capable of carrying about 2 million barrels of oil.

The Treasury recently released an advisory on what the shipping sector should be looking for in terms of evasion techniques and potential red flags, while it also updated its guidance related to Iran, North Korea and Syria.

An increased focus on shipping when it comes to official sanctions policy since around 2018 is likely to persist beyond this year’s election, said John Hughes, former deputy director of sanctions policy at the State Department and now a senior vice president at Albright Stonebridge Group.

“In a scenario where a total of 28 VLCCs were to be newly sanctioned, it could potentially raise VLCC hires to nearly $8.5 million for shipments from the U.S. to China,” said Stefanos Kazantzis, McQuilling Services LLC’s senior adviser for shipping and finance in New York, from around $6.5 million at present.

When the units of China COSCO Shipping Corp. were sanctioned last September, the cost of shipping oil from the U.S. to Asia soared to around $20 million, hurting the export market.

To be sure, the impact on freight rates won’t be the only factor the industry has to look at if sanctions are escalated. A dwindling supply of available ships for hire would put more pressure on the fleet. Shipowners will face hefty penalties for being late to load or unload cargoes, according to Georgi Slavov, Marex Spectron’s Head of Basic Resources Research.

Still, a recent decline in floating storage could weigh against any dramatic increase in shipping rates.

Oil benchmarks are trading in a market structure that doesn’t incentivize the use of floating storage — where traders store crude at sea in the hope of getting a higher price further out — said Kazantzis. The volume of North Sea crude stored at sea in Europe, for instance, has shrunk by more than half over the past two weeks.