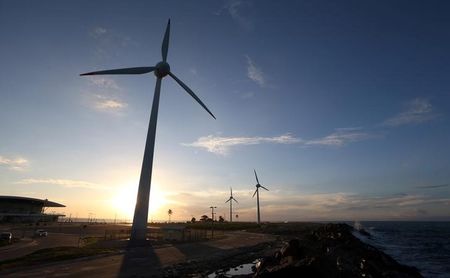 With bankers stuck at home and dealmaking mostly on ice, unabated demand for renewable power assets has made the sector a rare hot spot for acquisition activity in Europe this year.

While energy prices plummeted as oil producers flooded the market and coronavirus lockdowns shrank demand, renewables proved resilient. And as Europe sets out a recovery package aimed at cutting greenhouse gas emissions, buying up the keys to the continent’s energy future could be a smart bet.

The value of acquisitions of alternative energy assets in Europe is up 64% this year, according to data compiled by Bloomberg. This compares with a 15% fall across all dealmaking in the region, the data show.

The green demand is underlined by a number of major transactions. Among them is EDP-Energias de Portugal SA’s renewables unit, which is in talks about selling assets in Spain and Portugal. Germany’s Nordex SE is planning to dispose of a group of European wind farm projects. And Spain’s I-Squared Capital is working with boutique advisory firm PJT Partners (NYSE:PJT) Inc. to sell a solar portfolio that could be worth 1.5 billion euros ($1.7 billion).

If Europe is to meet its increasingly ambitious climate goals, it’s going to need a lot more green energy, especially with the expected growth of electric vehicles. Additional power will be needed to produce green hydrogen to help decarbonize heavy industry, which countries including Germany and the Netherlands have set as a priority.

“As electricity becomes more important for the consumer, additional players want to be part of that,” said Ralph Ibendahl, managing director for utilities and renewables at RBC Capital Markets. “The days where you could just ignore decarbonization, those days are really over and everyone recognizes it.”

Anyone looking to buy into renewables now was likely already interested before the coronavirus outbreak. Listed renewable-power assets in the U.S. outperformed fossil-fuel portfolios and the S&P 500 in the first four months of the year, according to a study from Imperial College London. That adds to the growing investment case for renewables as construction and financing costs fall and governments look to reduce carbon emissions.”When you’re looking for an acquisition candidate, you are looking for a long-term story that goes beyond this crisis,” said Milica Fomicov, a researcher at Imperial College London who was previously a portfolio manager at BlackRock Inc (NYSE:BLK). and JPMorgan Chase (NYSE:JPM) & Co. “Renewables have that long-term potential. We’ve seen it does well in both volatile and normal market conditions.”

Government policies have helped owners of renewable assets to outperform fossil-fuel generation. Even while demand for electricity shrank around the world as economies shut, in many countries renewables have first priority to sell power on electric grids. That’s allowed wind and solar farms to keep producing at the same time other generators have had to switch off.However, what may look like an increase in deals for renewables is really just a steady pace compared with other sectors that have fallen off, according to Charles Currier, a partner at law firm CMS in London.

“Before Covid, we’ve seen altogether more investment in renewables as countries around the world have looked at further decarbonized generation,” Currier said. “Most investors in the renewable sector are looking at long-term investment horizon, which has meant the short-term Covid impact hasn’t deterred their investment.”

Gold Pauses After 8-Year High in Bullion as Dollar Rises