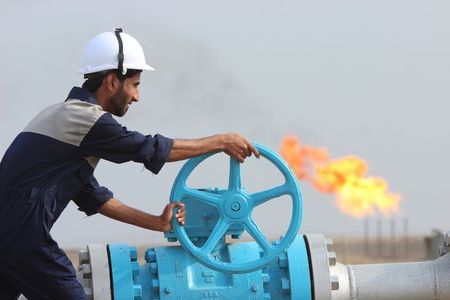 Investing.com – Oil prices jumped 3% Tuesday, holding on to advances from the previous session, ahead of key U.S. government data that will show whether demand for fuels is improving appreciably as businesses get back on their feet from Covid-19 lockdowns.

The International Energy Agency, in its June report released Tuesday, also forecast global oil demand at 91.7 million barrels per day in 2020, some 500,000 bpd higher than what it cited for May.

As a caveat, the IEA, however, warned that a slump in air travel due to the coronavirus means the world will not return to pre-pandemic demand levels before 2022.

Data also showed that Saudi Arabia exported just one oil cargo to the U.S. so far in June, equivalent to about 133,000 barrels a day, Bloomberg reported. That’s about one-tenth of the 1.3 million barrels a day it shipped in April, when Riyadh flooded the global market during a brief price war against Russia.

Russia’s early crude Urals program for next month — July 1-5 — meanwhile, showed even lower shipments than June. That was another sign that Moscow was keeping to pledged cuts under its OPEC+ alliance with Saudi Arabia and other global oil exporters.

“The ‘price’ of oil has a lot of optimism in it in the near term with all of the COVID risks but … I could (also) paint a picture of reasons why I think prices are about to crater,” said Scott Shelton, energy futures broker at ICAP (LON:NXGN) in Durham, North Carolina. “My conviction on both currently is pretty close to nil and I don’t think I am alone.”

The U.S. economy is unlikely to achieve full recovery until Americans are certain that the coronavirus pandemic has been contained, Federal Reserve Chairman Jay Powell said on Tuesday.

“Moreover, the longer the downturn lasts, the greater the potential for longer-term damage from permanent job loss and business closures,” Powell said in testimony before a Senate banking committee.

Oil prices rose ahead of the American Petroleum Institute’s weekly snapshot on crude and fuel products inventories due at 4:30 PM ET. The API numbers serve as precursor for official stockpiles data scheduled for Wednesday from the U.S. Energy Information Administration.

A consensus of analysts’ estimates tracked by Investing.com showed that U.S. crude inventories likely grew by 500,000 barrels for the week ended June 12. Crude stockpiles rose 5.72 million barrels in the previous week to May 5 to reach a record high of 538 million barrels, EIA data showed.

Gasoline stockpiles, the one bright spot on the oil complex so far, is expected to have fallen 230,000 barrels versus a previous build of 866,000.

Everything you need to know about Amazon Prime Day 2020, including the new speculated date.