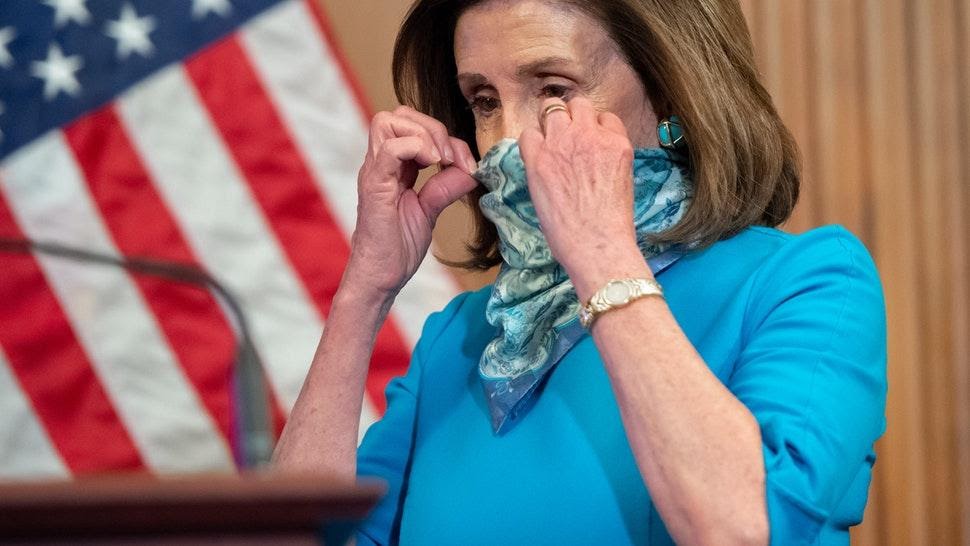 It all goes right along with the liberal playbook; Never let a crisis go to waste!

Speaker of the House Nancy Pelosi (D-CA) is reportedly drafting a multi-trillion dollar coronavirus aid package that includes a $750 billion bailout for states and municipalities affected by the novel coronavirus — and Republicans are not being asked to consult.

The aid package, which would be the fourth coronavirus aid package issued in just under three months — only weeks after the $2.2 trillion CARES Act — is focused on providing what Democrats believe are “much needed” funds to states and cities laboring under massive debt, according to the Wall Street Journal, but Republicans caution that federal legislators might be trying to bail out their suffering state colleagues, many of whom are trying to erase debt that long predates the coronavirus pandemic.

Pelosi is looking to keep the true contents of the bill under wraps until she and others are ready to unveil it themselves. Last week, Pelosi phoned Congressional leaders to ask them to submit a laundry list of aid requests, telling them to “think big,” and admitting that the bill would be a “wish list” of Democratic policy initiatives, in order to give the party a better position from which to negotiate.

In plain English – get your liberal wish list ready so you can be bailed out by using COVID-19 as a cover for your failures.

Which stock has performed best since the market top in mid-February?

If you guessed a pharmaceutical company with a promising coronavirus treatment, you wouldn’t be far off. A technology company that enables work-from-home computing would also be a good guess, but also wrong.

How about a financial company?

It’s counterintuitive — but true. MarketAxess Holdings Inc. has gained 49.14% since the S&P 500’s record close on February 19, according to Dow Jones Market Data, even as concerns about households and businesses facing cash flow problems and rock-bottom interest rates have pushed the financial sector to be the second-worst performing S&P 500 sector this year, behind only energy.

Yet MarketAxess, which brands itself as “the leader in e-trading for global fixed income,” may be in a sweet spot as investors from individuals to the United States Federal Reserve give bonds another look — as both issuers and buyers.

As MarketWatch’s Philip van Doorn noted earlier in April, MarketAxess increased revenue 35.7% from a year ago in the first quarter — more than pandemic darlings Amazon.com Inc. and Netflix Inc. Trading volumes were up 29% compared to a year ago starting in February, company executives said on their quarterly earnings call in late April.

The “press” are no longer reporters but rather actors looking for their 15 minutes of fame.

President Donald Trump ended the White House Coronavirus Task Force press conference on Monday after a CNN reporter repeatedly interrupted the president as he tried calling on another reporter.

“OK, anybody else?” Trump said to another reporter. “Please, go ahead in the back, please.”

After Trump called on the other reporter, Collins interrupted, “I have two questions.”

“But you pointed to me,” Collins complained. “I have two questions.”

“Next,” Trump signaled to the other reporter. “Next, please.”

“But, you did, you called on me,” Collins stammered.

“I did and you didn’t respond and now I’m calling on the young lady in the back, please” Trump continued.

Collins has a history of making the press conferences about herself through her often combative approach in interacting with the president which is about creating conflict rather than getting relevant information from the administration.

While President Donald Trump pushes states to allow businesses to reopen, companies in technology, financial services, insurance and other industries that can successfully function over internet lines are choosing to keep their people home.

Long commutes have been replaced with heavy Zoom use, and workers in big cities are in no hurry to sit on crowded subways and buses during rush hour.

Corporate leaders are waiting for some reliable combination of mass testing, therapeutics, contact tracing and possibly even a vaccine, before they’ll consider it a worthwhile risk to send employees back into the traditional workplace. Another consideration is child care, and with schools closed across much of the country and summer camps unlikely to proceed as planned, kids are likely to be at home during the day at least for the next few months.

Gold Dips But Stays Above $1,800 as Some Take Profit