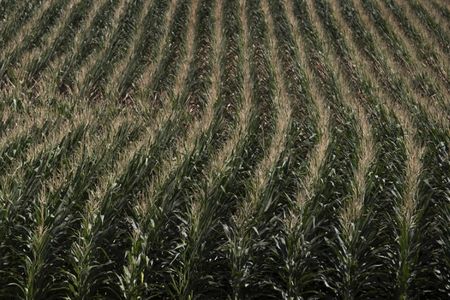 (Bloomberg) — The coronavirus pandemic keeping cars off the roads and shutting down America’s meat plants is clouding the outlook for some of the world’s largest agricultural commodities traders.

That’s because the fallout of the deadly virus is creating a domino effect, hitting everything from corn to soybeans. With drivers off the roads, corn demand to make ethanol has plunged, while U.S. meat-plant shutdowns are forcing farmers to cull their animals, which erodes demand for feed inputs like soy.

All of that is hurting earnings prospects for the likes of Archer-Daniels-Midland Co., which reports results Wednesday, and Bunge (NYSE:BG) Ltd., scheduled for next week. While results cover the first three months of the year, before the full brunt of the lockdown effects, investors may get presented with a bleaker outlook.

“Although it was mostly business as usual for ADM and Bunge through the first quarter of 2020, the fundamentals took a leg down in late March and the demand outlook has since deteriorated significantly,” said Thomas Simonitsch, an analyst at JPMorgan Chase (NYSE:JPM) & Co.

The ripple effects of the virus are becoming clearer. Ethanol production — which accounts for about a third of the U.S. corn crop — has fallen to a record low. Margins were already negative before the virus spread and a price war between Russia and Saudi Arabia sent crude markets into meltdown.

Companies from crop trader Andersons Inc. to oil refiners such as Valero Energy Corp (NYSE:VLO). are slowing or idling ethanol plants. ADM said it’s temporarily halting production at its corn dry mill facilities in Iowa and Nebraska — the same mills it’s been trying to sell and are expected to report as a standalone unit for the first time.

Ben Bienvenu, an analyst at Stephens Inc., viewed the closure as a positive step “given the significant operating losses we are currently modeling for ADM’s ethanol business this year.”

Adding to the challenging outlook are meat disruptions, with at least 22 plant closures reducing pork processing capacity by 25% and beef capacity by 10%. While President Donald Trump has ordered meat plants to stay open, it’s still unclear how it will all work and whether employees will stage walk outs.

As plants close, farmers lacking barn space are forced to kill their animals. About 160,000 hogs a day nationwide have to be euthanized, according to U.S. Representative Collin Peterson from Minnesota. Fewer animals will reduce the need for soybean meal, a key ingredient in rations. That’s already evident as profits for bean processing have fallen to a six-month low.

Still, results may be shielded by an improved margin environment in Brazil, where a record-low currency has helped farmer selling, with the Chinese taking advantage to pick up cargoes there. Rival Cargill Inc., the U.S.’s largest closely held company, said this week that its operations in the South American nation had benefited.

“Both Bunge and ADM should benefit from the accelerated farmer selling and margin boosts,” said Ben Kallo, a Robert W. Baird analyst.

Oil gains on growing fuel demand, even as infections rise