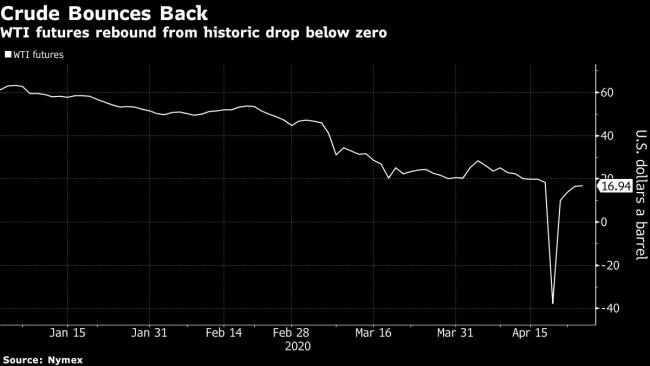 (Bloomberg) — Oil resumed its slide in Asia as the market continued to factor in the huge demand destruction caused by Covid-19.

Futures in New York fell as much as 4.4%, canceling out a 2.7% gain on Friday. The U.S. benchmark has lost more than 70% this year as the virus brought some of the world’s biggest economies to a standstill, with losses exacerbated by a damaging price war between Russia and Saudi Arabia.

Top producers earlier this month agreed a deal to cut output by about 10 million barrels a day starting from May to try and stabilize the market. Saudi Aramco (SE:2222) began reducing production last week ahead of schedule, according to a Saudi industry official familiar with the matter.

There were tentative signs at the weekend that Covid-19 might be loosening its grip, with the death toll slowing by the most in more than a month in Spain, Italy and France while fatalities reported in the U.K. and New York were the lowest since the end of March.

U.S. producers are curbing their activity, with drillers idling 60 rigs in the past week, according to data from Baker Hughes Co. on Friday. This marks the sixth straight week of decreased activity levels, halting almost half of American exploration.

Still, the market remains hostage to a giant glut, with forecasters continuing to revise down their estimates for global crude demand this year as virus lockdowns continue. Concerns that storage space might soon be exhausted saw the expiring WTI May contract collapse into negative territory last Monday as holders of long positions sought to avoid having to take physical delivery.

Read More: The 20 Minutes That Broke the U.S. Oil Market

In a sign of how severe the supply imbalance is, traders are using barges — usually busy moving fuels around Europe’s petroleum-trading hubs — as cargo storage instead. Meanwhile, an American pipeline operator is looking at ways to free up space on its conduits to stock more crude.

Hedge funds boosted their net-bullish Brent position to the highest in eight weeks in the week ending April 21, despite the market decline.

Dollar Up as Investors Prepare for Tough Quarter

Day Ahead: 3 Things to Watch for July 14