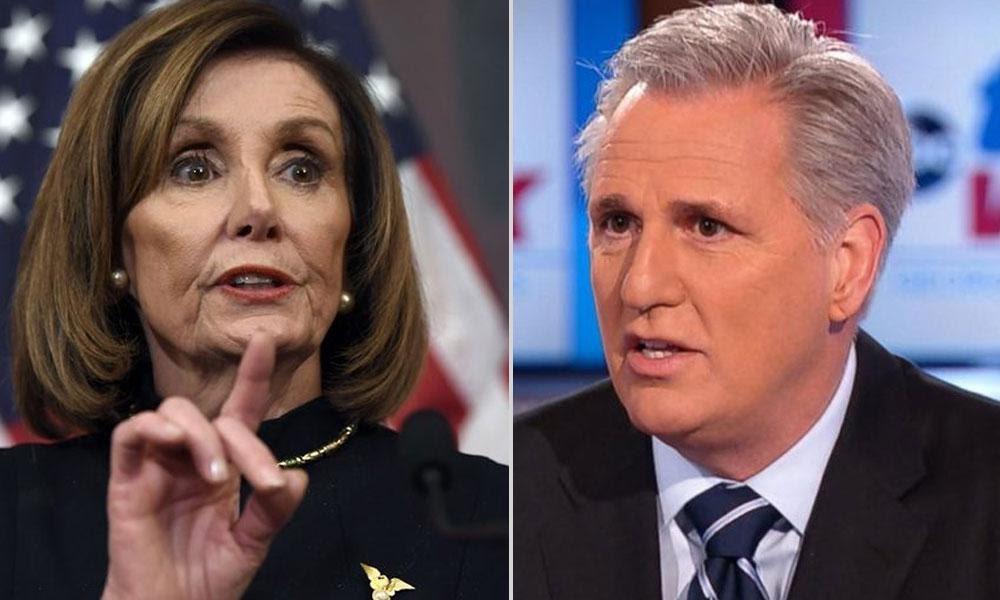 “Well, what it would do is something that we’ve been requesting for the last two weeks — more funding for the small business program,” he said. “This business program has worked very well. More than 1.6 million businesses requested the money to pay their employees, to pay their rent. Unfortunately, Nancy Pelosi has held that up for the last two weeks. What we have watched and the one question I have watching her on the Sunday show, name me one productive thing Speaker Pelosi has accomplished in this pandemic. When President Trump in January 31, put in the ban from China, February 24, she asked people to gather together in San Francisco.”

“She actually fought the ban,” McCarthy continued. “When we wanted to put the CARES Act together, she came in, held it up. Now we had a small business program working. She’s now held up the money. There’s 700,000 small business applications in right now trying to keep their doors open.

How many more millions of Pelosi’s layoffs will we have to endure before she’ll put people before politics? Even at this moment to get this agreement, we could have been done yesterday, but the Democrats continue to hold up even though we have agreed to all the numbers.”

He also pointed to other instances Pelosi has opposed Trump for the sake of opposing Trump and reiterated she has accomplished very little.

“I’ve watched Nancy Pelosi disagree with this president every time. January 31, when he stopped the flights from China, she wanted to put on the floor a no-ban to make that much harder for the president to do. February 24, she asked people to gather in San Francisco in Chinatown,” McCarthy said.

U.S. crude oil bounced back into positive territory on Tuesday, after a historic plunge below zero that shocked investors and pushed down stock prices and Asian currencies.

Futures for May delivery of West Texas Intermediate rose nearly $39 but were still just $1.76 a barrel, after a storage squeeze and collapsing fuel demand crushed prices to eye-popping lows.

The contract expires at the end of trade on Tuesday, which is pushing investors to clear them from their books at any price, and June prices at $22 per barrel point to some relief.

But the collapse highlighted intense disruptions globally as the coronavirus pandemic and lockdowns paralyze the world economy, and augurs badly for a swift return to growth.

The unprecedented dislocations in oil markets come as hopes for a swift recovery from the coronavirus crisis are waning as governments take cautious paths to restarting their economies.

If lessons can be drawn from China, industrial production can be switched back on relatively quickly once anti-virus measures are eased, but consumption will take longer to revive if social distancing and other movement restrictions continue, Oxford Economics said in a note to clients.

Sen. Mitt Romney (R-UT) was the only Republican senator not selected to be a part of a new congressional coronavirus task force created by the White House to study the reopening of different parts of America’s economy.

According to a spokesperson for Romney, who was the only Republican who voted to impeach President Donald Trump earlier this year, the Utah senator was not asked to be a part of the initiative.

Since Romney joined the United States Senate in 2019, he and Trump have sparred. Before that, the two also had a rocky relationship, with Romney calling Trump a “con man” during the 2016 presidential election. Similarly, Trump blasted Romney in February 2016 as “one of the dumbest and worst candidates in the history of Republican politics.”

Romney, one of the few Republicans who almost always breaks with Trump, also claimed he was “sickened” by the results of special counsel Robert Mueller’s report. Trump later referred to Romney as a “secret Democrat asset.”

Buck has been spending some of his coronavirus-imposed off time by doing amusing play-by-play of all sorts of video sent to him by fans just to have a bit of fun.

Buck, though, firmly but politely shut the door on that offer.

The live webcam site wanted Buck to narrate 25 sex videos over six weeks for a one million paycheck.

The site even claimed that a chief feature of Buck’s narration would be to help the visually impaired enjoy sex videos.

Despite the hard sell, Buck took a hard pass, even joking, “Depending on the site, they could just be handing some of my money back to me.

“So, I’ll hold out for a better offer and try to hold on to my day job. But I have to say I’m flattered,” he said of the offer.

Oil Down Despite Decrease in Inventories