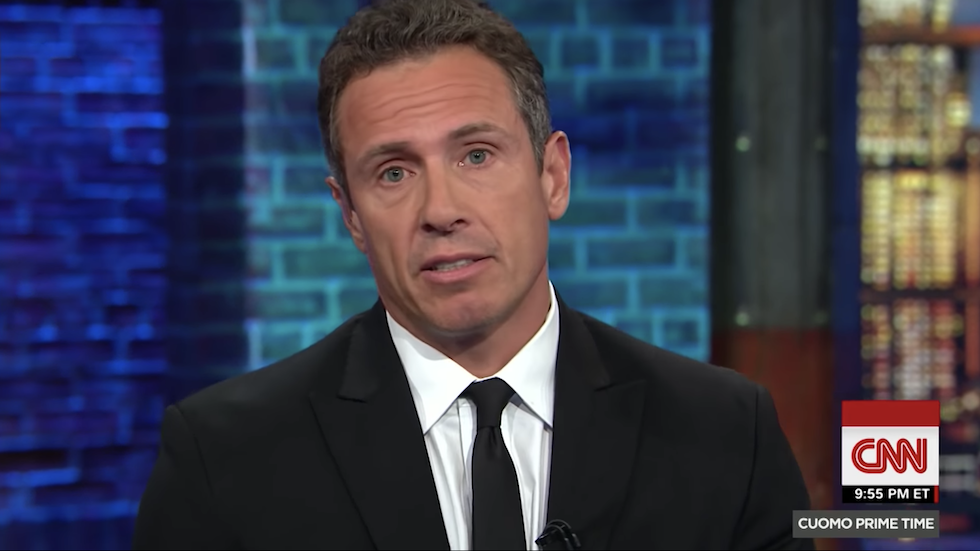 Looks like maybe the coronavirus made one of the biggest liberal talking heads on CNN to reflect on what he’s really doing for a living…and he’s not happy.

Chris Cuomo’s coronavirus-induced fever may have subsided but the CNN anchor was red hot on Monday.

The longtime cable host, 49, had an existential mini-crisis on his SiriusXM show, lashing out at his lucrative primetime gig at CNN.

“I don’t want to spend my time doing things that I don’t think are valuable enough to me personally,” Cuomo said. “I don’t value indulging irrationality, hyper-partisanship.”

Cuomo said his battle with COVID-19 has made him rethink his values and question his position as a public figure.

“I don’t like what I do professionally,” he said. “I don’t think it’s worth my time.”

Speaking about his job as the host of CNN’s “Cuomo Prime Time,” the Queens-born anchor said he doesn’t want to spend his time “trafficking in things that I think are ridiculous.”

Such things include “talking to Democrats about things that I don’t really believe they mean” and “talking to Republicans about them parroting things they feel they have to say.”

There you have it, as bare as it gets.

Equity markets rallied globally on Tuesday as Chinese trade data defied expectations of a deep downturn as a result of the coronavirus pandemic, igniting hopes that world economies can soon recover and removing the safe-haven allure of the greenback.

Oil prices fell more than 6% as investors doubted that record supply cuts by the Organization of the Petroleum Exporting Countries and other producers would soon balance markets pummeled by the pandemic’s blow to demand.

Gold soared nearly 2% and hit its highest since late 2012 as investors piled in to hedge against potential inflation and currency debasement resulting from massive central bank and government stimulus measures around the globe.

Data showed that China’s exports fell only 6.6% in March from a year ago, far less than the expected 14% plunge. Imports fell 0.9% compared with expectations for a 9.5% drop.

Stocks rallied around the globe on the Chinese data and signs that sweeping lockdowns to contain the spread of the coronavirus were working. Still, the World Health Organization warned the epidemic has not yet peaked.

An African American Georgia state Democrat has just endorsed Trump for president over what he says Trump has done for the black community:

Georgia State Rep. Vernon Jones endorsed President Trump on Tuesday, becoming the first Democrat in the state to buck his party and support the GOP president for reelection.

Jones touted Trump’s handling of the economy and issues impacting black Americans in an interview with The Atlanta Journal-Constitution. The Georgia lawmaker represents a heavily Democratic district that covers parts of DeKalb and Rockdale counties.

“It’s very simple to me. President Trump’s handling of the economy, his support for historically black colleges and his criminal justice initiatives drew me to endorse his campaign,” Jones said.

“This is not about switching parties. There are a lot of African-Americans who clearly see and appreciate he’s doing something that’s never been done before,” Jones continued. “When you look at the unemployment rates among black Americans before the pandemic, they were at historic lows. That’s just a fact.”

“A philosopher once said, ‘One courageous man in the crowd is a majority.’ I’ve got the courage to express my convictions,” Jones said. “I believe that Donald Trump is the best person to lead this country going forward.”

Notice to US enemies – this Lion still has teeth!

With an aircraft carrier forced into port and staff at bases handling nuclear missiles hit by COVID-19, the US military wants rivals to understand: don’t test us, we have not been weakened.

Statement after statement from the Pentagon has sought to deliver that message amid questions this week over whether the US fighting force can maintain full readiness, with cases among service members now at 2,031.

“I wouldn’t want any mixed messages going out there to any adversaries that they can take advantage of an opportunity, if you will, at a time of crisis,” he added.

“That would be a terrible and tragic mistake if they thought that.”

Peso steady on subdued trade ahead of holidays