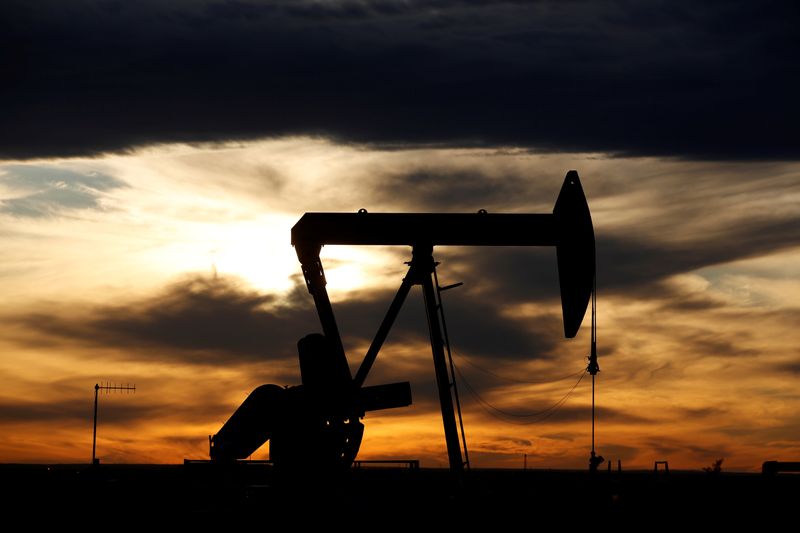 (C) Reuters. FILE PHOTO: The sun sets behind a crude oil pump jack on a drill pad in the Permian Basin in Loving County

DUBAI/MOSCOW/LONDON (Reuters) – OPEC and it allies held talks on Thursday on record oil output curbs of about 15 million barrels per day (bpd) or more, roughly 15% of global supplies, to support prices hammered by the coronavirus crisis, sources involved in the discussions said.

They said the plan included cuts of about 5 million bpd from producers outside the group known as OPEC+ and could be made gradually, as the group seeks to overcome resistance from the United States whose involvement they see as vital to a deal.

Talks have been complicated by friction between OPEC leader Saudi Arabia and non-OPEC Russia, two of the world’s biggest oil producers. But sources on both sides said they had overcome differences amid the deepest oil market crisis in decades.

Global fuel demand has plunged by as much as 30 million bpd, or 30% of global supplies, as steps to fight the coronavirus have grounded planes, reduced vehicle usage and curbed economic activity. An unprecedented 15 million bpd cut still falls short.

“We are expecting other producers outside the OPEC+ club to join the measures, which might happen tomorrow during G20,” the head of Russia’s wealth fund and one of Moscow’s top oil negotiators, Kirill Dmitriev, told Reuters.

Thursday’s OPEC+ talks will be followed by a call on Friday between energy ministers from the Group of 20 (G20) major economies, hosted by Saudi Arabia.

Benchmark Brent oil prices hit an 18-year low last month and were trading on Thursday around $32 a barrel, half their level at the end of 2019, dealing a severe blow to budgets of oil producing nations and high-cost U.S. shale oil industry.

Iranian Oil Minister Bijan Zanganeh said proposals in the talks envisaged OPEC+, which groups the Organization of the Petroleum Exporting Countries, Russia and others, cutting 10 million to 11 million bpd in May to June, alongside cuts from the United States, Brazil, Norway and other outside of OPEC+.

OPEC+ sources said they expected cuts from the United States and others to amount to about 5 million bpd, and that production curbs would be in place for two years. One OPEC source said Riyadh was ready for production cuts to last beyond 2022.

Washington was invited to Thursday’s OPEC+ talks but it was not clear if it had joined the video conference.

The United States, whose output has surged in recent years to surpass that of Saudi Arabia and Russia, has not committed to any cuts, although Washington has said U.S. output was falling gradually anyway because of plunging oil prices.

Russia had previously said such a natural decline was not the same as making cuts.

Before the talks, Moscow and Riyadh had been at odds over what level of production to use to calculate reductions, after Saudi Arabia hiked its supply in April to a record 12.3 million bpd, up from below 10 million bpd in March. Russian output, meanwhile, has been running about 11.3 million bpd.

An OPEC source said the two sides, which fell out during an acrimonious meeting in Vienna in March when a previous production deal collapsed, agreed that cuts would be calculated from an 11 million bpd baseline for both countries.

“We have managed to overcome differences. It will be a very important deal. It will allow the oil market to start on a path to recovery,” said Dmitriev, who last month was the first official to propose a deal involving members other than OPEC+.

Independent global storage facilities have been filling up while supplies have flowed even as demand dried up.

“Ultimately, the size of the demand shock is simply too large for a coordinated supply cut,” Goldman Sachs (NYSE:GS) had said in a note, even before Thursday’s video conference got underway.

Several U.S. states could order private companies to limit production under rarely used powers. The oil regulator in Texas, the largest producer among U.S. states with output of about 5 million bpd, meets on April 14 to discuss possible curbs.

But Trump has not shown any appetite for U.S. cuts, instead he has said he had many options if Saudi Arabia and Russia failed to reduce supplies. U.S. senators called on the White House to impose sanctions on Riyadh, pull out U.S. troops from the kingdom and impose import tariffs on Saudi oil.