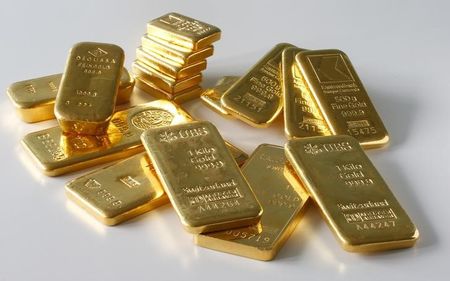 Investing.com — Gold prices stabilized on Thursday as the combined impact of central bank measures around the world to support financial markets appeared to gain at least temporary traction.

The Federal Reserve opened swap lines with nine more central banks, aiming to ease a worldwide scramble for cash that has sent the dollar skyrocketing. Meanwhile, other measures, including a new Fed facility to support money market funds, have slightly eased the pressure on investors to raise cash by selling gold.

While portfolio flows continue to vacillate, some analysts are arguing that the near-term fundamental picture for gold has weakened, in as much as central banks – especially in emerging markets – are coming under pressure to sell reserves to support their currencies.

Russia’s central bank, one of the world’s biggest buyers of physical gold in recent years, said on Thursday that it would buy rubles as long as the price of Urals crude oil remained below $25 a barrel (it’s currently around $21).

“The decline of Russian CB purchases from 160 tons last year to zero due to lower oil prices alone is estimated to decrease equilibrium price by $40/oz,” analysts at Goldman Sachs (NYSE:GS) led by Jeffrey Currie said in a research note on Tuesday.

Goldman analysts revised down their forecasts for gold on a three- and six-month horizon by $100 each to $1,600 and $1,650, but kept their 12-month target of $1,800 unchanged. Partly, that’s because massive central bank easing has raised the likelihood of both nominal and real returns on government bonds staying lower for longer. In the last 24 hours alone, the European Central Bank, the Bank of England and the Reserve Bank of Australia have announced major quantitative easing programs, while the Swiss National Bank signaled it will sell more francs in the open market to stop the currency appreciating further.

However the same weakness in non-dollar currencies has also spurred an increase in retail investor demand for gold, according to the World Gold Council. Inflows into gold ETFs in the week to Tuesday rose to over $617 million in Asia, turning flows positive for the year-to-date, according to the WGC’s figures.

The data illustrate how ETFs are supplanting traditional purchases of the physical product as the preferred means for gaining exposure to a traditional store of value.

Shape of the day