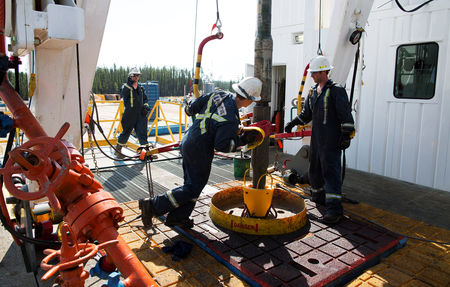 Investing.com – Oil prices pushed higher Friday, bouncing after recent hefty losses, amid hope that major oil producers will cut global supply further, and as officials tried to play down a big jump in China’s count of patients and victims this week.

News surrounding the Covid-19 virus outbreak continues to keep markets on edge, and China’s Hubei province, the region at the epicenter of the coronavirus, reported almost 5,000 new cases.

This suggests the surge to nearly 15,000 reported a day earlier was down to a new method for counting infections, and thus, as the World Health Organization said, not necessarily the “tip of an iceberg” of a wider epidemic.

The International Energy Agency, the U.S. Energy Information Administration and the Organization of Petroleum Exporting Countries have all slashed their forecasts for global oil demand in the first two quarters of 2020 in their monthly reports published this week.

OPEC, which represents the oil producers, sees the smallest effect. It lowered its 2020 demand forecast for its crude by 200,000 barrels per day, citing worries about the coronavirus outbreak in China, the world’s biggest oil importer.

The news prompted expectations the producer group could cut output further. Indeed, the so-called OPEC+ group of producers is expected to cut output by an additional 600,000 barrels per day at its next meeting in March to trim some oversupply in the market and support prices.

Rystad Energy, a Norwegian independent upstream oil and gas analysis and consulting company, has its doubts as to whether this will be enough to sustain even the current move higher.

Such a cut may “not be enough to fill the demand gap now exacerbated by the coronavirus,” Rystad Energy’s Senior Vice President and Head of Oil Markets Bjornar Tonhaugen said in a statement late Thursday.

“The economic shut-down in China will cause the largest negative oil demand shock since 2008,” he added.

In addition to the virus, oil markets are still contending with unseasonably warm weather across the northern hemisphere.

Last month was the warmest January on record, dealing a further blow to demand for heating oil, natural gas and coal from the U.S. to Europe and Russia.